More than 10,000 bears are kept on bile farms in China, and official figures put the number suffering the same fate in Vietnam at about 1,200. The bears have their bile extracted on a regular basis, which is not only used in traditional medicine but also in many ordinary household products.

Bile is extracted using various painful, invasive techniques, all of which cause massive infection in the bears. This cruel practice continues despite the availability of a large number of effective and affordable herbal and synthetic alternatives.

Most farmed bears are kept permanently in cages, sometimes so small that they are unable to turn around or stand on all fours. Some bears are caged as cubs and never released, with many kept caged for up to 30 years. Most farmed bears are starved and dehydrated, and suffer from multiple diseases and malignant tumours that ultimately kill them.

Our Kuma Korps - Jasper the Moon Bear design, was made to honor a rescued Moon Bear named Jasper.  A portion of the sales will be donated to an organization called Animals Asia, who have spearheaded the effort to rescue Moon Bears from bile farms and move them to sanctuaries for rehab and to live out the rest of their natural lives. 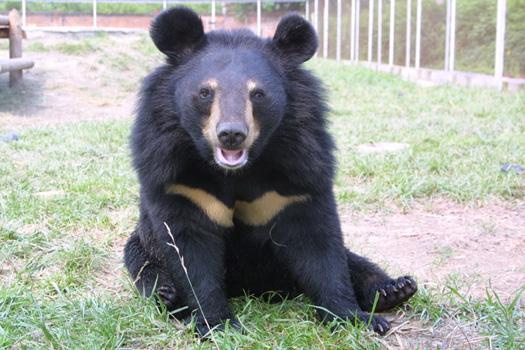